I love film whether its domestic, foreign, independent or a big budget blockbuster series. Marvel releases about 3 movies every year and sets the standard for action comedies. Marvel movies are some of the highest grossing films in the world and so I decided to write an article about how much moolah they really make. Since this post is primarily fact based it will mainly be comprised of charts, so if you don’t want to read my commentary then feel free to just check out the data.

Let’s start with the beginning

Disney bought Marvel for $4 billion in 2009. Before the acquisition – Marvel would do movies with Disney on a contractual basis and there were no specific terms for a long-term partnership. Marvel films would also be produced and distributed with other production companies. Here is a list of all the Marvel comics that had been made into movies leading up to Disney’s acquisition.

You’ll recognize most of the names and can probably remember that some were good, some bad, but it was a completely disconnected series of films except for the trilogies including X-men and Spiderman. At the time most people didn’t know what Marvel actually was and simply just put all of these films with other superhero movies into one basket.

This all changed in 2009 when Disney pulled the trigger and bought Marvel for $4 billion. The acquisition is said to have been motivated by Robert Downey Jr’s successful Iron Man film, which gave Disney executives the confidence that the formula could be duplicated with other characters. Iron Man represented the resurgence of a forgotten actor in RDJ and the beginning of the Marvel Universe. Since Disney’s acquisition of Marvel – they have created the following movies.

Now these movies, I guarantee you recognize because every single one made money at the box office, even Fantastic Four and Ghost Rider…This collection represents the power of Disney to make quality action films.

Disney Has No Plans of Stopping

With the amount of money these films have made (that I still havent discussed, don’t worry it’s coming up next) Disney will be ramping up production. Marvel has also completed the origin stories for most of these characters in individual films, so they will be able to drop in superhero support for all new stories moving forward. This setup is beneficial for less known superhero characters, like the Black Panther, because Marvel can drop in RDJ’s Iron Man to bolster buzz around the film. Please check out Marvels pipeline moving forward and note that this list is as of 9/3/2016.

As you can see Marvel is continuing to add characters to its Universe and will certainly have crossover in the films moving forward.

In total Marvel films have grossed $8.7 Billion in the United States and $21 Billion worldwide in ticket sales. This includes films since before Disney’s acquisition of Marvel, so not all this cash has gone to Disney, but you can still rest easy knowing that Disney has made back its money. Captain America: Civil War, Iron Man 3, Avengers: Age of Ultron and Marvel’s Avengers together grossed $5.2 Billion in ticket sales. Each film’s budget was roughly $200 Million with maybe an extra $100 Million in marketing and other miscellaneous expenses totally $300 Million. That means that these 4 movies alone, paid for the acquisition of Marvel and this is only looking at ticket sales, excluding all merchandising and amusement park residual revenue. Please see the chart below, which shows Marvels top ticket revenue producing movies. 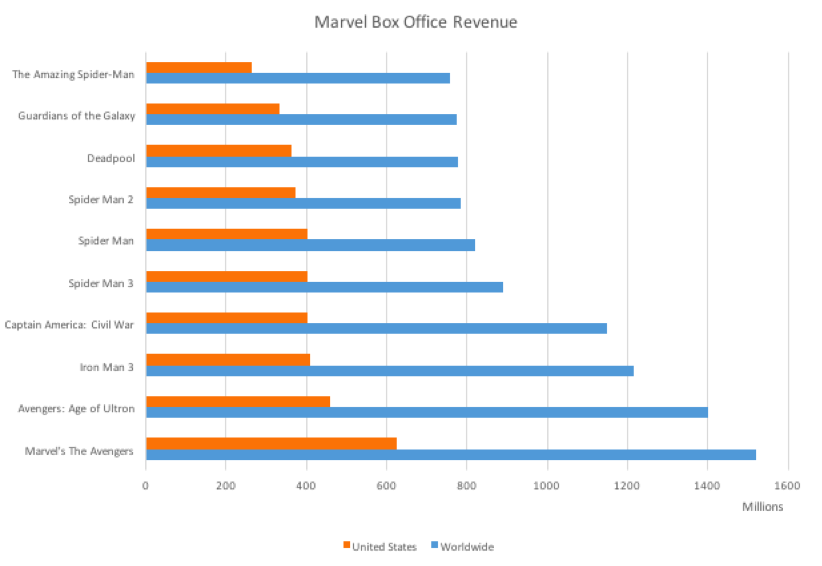 I hope you have enjoyed reading about how Disney has turned a historic American comic franchise into a cash cow that entertains the world. An interesting side-note for Disney is that Marvel was not its first notable studio acquisition, but that Steve Jobs’ Pixar came first. Disney Studios was struggling with creating successful animation characters and constantly fell flat while Pixar was dominating the industry. After several licensing deals Pixar sold out to Disney, which freed up Steve Jobs time so he could recreate Apple. – Anyway, back to the point of this article – check out the list of all Marvel films and their box office numbers below.